You are here: Home / An Interview With… Firewoodisland 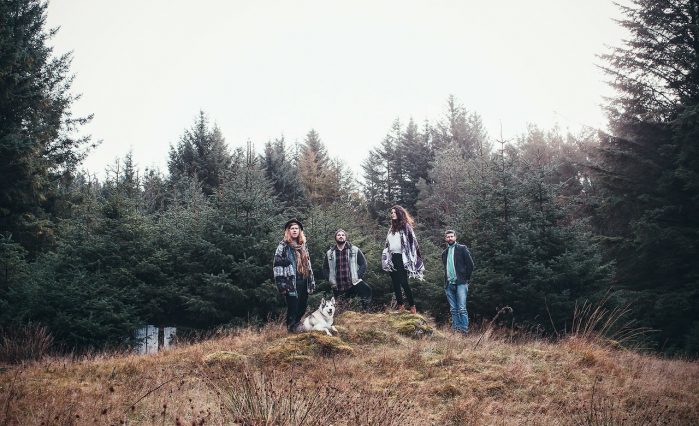 Firewoodisland are a four-piece indie-folk band hailing from Norway and Wales. Their unique and uplifting music has garnered the attention and affections of Q magazine, Amazing Radio and BBC Radio, to name but a few. Though not a “loud” band, their sound is huge: expect beautiful vocal harmonies, celtic melodies and to be taken on a magical musical journey. It won’t be long until Firewoodisland are playing bigger stages, as these guys have an epic festival sound about them.

Hi there, how are you and what are you up to today?

Hello! We are all great. Today has been a very exciting and productive day for us, starting in Sheridan’s Law Firm where we signed a contract with our manager to officially welcome him to the team. We then took the tube to St John’s Wood and headed to Abbey Road Studios to master our upcoming single with the legendary mastering engineer, Frank Arkwright. This was followed by good food, and then we all went our separate ways, chilling out in London.

To those not familiar with you, how would you describe your sound?

We describe our sound as Celtic Viking Music, and we probably fit comfortably into the category of indie folk. We hope our songs are uplifting and inspiring for people. We’ve had some great descriptions about our music making people want to run off into the woods and play with the pixies, or dance around a campfire by the moonlight. Glad to hear people are enjoying it, no matter how it might be expressed!
On a typical Firewoodisland track you can expect to hear thick layers of harmonies, rhythmical string instruments, wind and brass, solid upright bass melodies, driving drum beats, and lots of other small details.

Firewoodisland started off as a solo project by composer and lead vocalist, Stian. Tell us about how you all met each other to become the four-piece you are today?

In a far off forest across the ocean Stian carved himself a longship so that he could follow the songs of the waves. They lead him to the South coast of a Celtic land. Inspired by the people he met and the local legends he heard he started creating new songs. In doing so, he inspired others to pick up their instruments and follow him on a journey. There have been many mountains to climb, and rivers to cross. Steve he found in a vineyard, Abi he met on an iron bridge, and Rowan he shared an office with in Cardiff.

Now that you are a four piece band, what is your usual songwriting process? Do you sit together as a group and write each song together? What does each band member bring to the table?

On the most part, Stian writes the songs, but occasionally the rest of the band chip in with lyrics and melodies. To quote Rowan, “we all just sit and wait for Stian to write the next hit”. The collective creative process tends to happen in the arrangement of the songs.

Other than our instruments and voices, each member contributes differently to the band. Stian obviously does most of the song writing and composing, but he is a man of many talents, taking the lead in the production, graphic design and film. Steve’s input is crucial to the arrangement of the songs, and he is one chatty guy with some awesome networking skills. He also has a fat car, which you can imagine is pretty useful, despite the constant smell of petrol leaking through the air vents and it’s hippo form. Rowan is a very dramatic guy, acting alongside his post in the band, he is the key man for organising practises, working on our stage presence and the shape of the show. Abi is in charge of making Firewoodisland look great, both visually and literally. She is an illustrator, so she takes care of the band imagery and video concepts.

You did a phenomenal cover of Sia’s “Chandelier” which has had over 4000 plays on SoundCloud. What other artists and bands do you really like at the moment and why?

Firstly, thanks. We’re glad you enjoyed it. It was a fun process, reinventing someone else’s song to fit our sound.
From a song writing and arrangement perspective, we are really inspired by James Vincent McMorrow, Justin Vernon, Ryan O’neill, Thomas Dybdahl, and good friend Ali Lacey of Novo Amor. We also love the sound of Jonsi, Matthew & The Atlas, The Staves, Rae Morris, Hozier, Zaz, and our besties… Long For The Coast. There’s different reasoning for why we love these bands, but to name a few, it would be creative song writing, interesting use of instruments, great and quirky voices, beautiful use of harmonies, creative marketing and a brilliant all around product.

You’re performing at the Hoxton Bar & Kitchen next week, are you excited for the show? What can we expect from your live performance?

We’re really looking forward to supporting Sons of Bill, and for the chance to play to a London crowd again. It will be exciting to see how the new and improved versions of a couple of our tunes are received.
You can come expecting five people on stage instead of four, as Stian’s younger brother is joining us on keys for the night. That’s all we’re giving away! 😉

What’s the best gig you have ever done and why?

We really enjoyed playing Farmfest last summer in Somerset. It was a fantastic atmosphere in a big top tent that was full to the brim, and a crowd that were an absolute joy to play for. In fact, we enjoyed it so much that we agreed to do a small acoustic set out of the back of a van next to one of the stalls selling woollen clothing. This was also Rowan’s first show with the band, and it was a blast getting to know him.

What’s the worst gig you have ever done and why?

We don’t really want to name and shame our gigs and the places we have played. It’s better to learn from the bad ones and focus on the positive. Let’s just say that not all of them are as fun as Farmfest was, and leave it at that.

If you weren’t musicians, what would you be?

Finally, do you have anything coming up in the pipeline e.g. new releases, gigs or anything else you would like to tell us about?

Following on from Hoxton Bar and Kitchen in London, we have an exciting gig lined up at The Birdcage in Bristol on Thursday 26th Feb, so if that is your neck of the woods, please come and join us!

Our new single is just around the corner (as of today with it’s shiny new master), and we have a stunning music video to accompany it, featuring two amazing girls.

We’re excited to be reaching Manchester in April as part of The Moonrise Run Festival in Heaton Park on the 18th. We also have a couple of shows in Cardiff in March and April, and a show in Camden early April.

Thank you very much for taking the time to chat with us Firewoodisland!

Thanks for having us. 🙂

Check out Firewoodisland’s video for their stunning track, “Simon“.

Keep up to date with the band on social media: