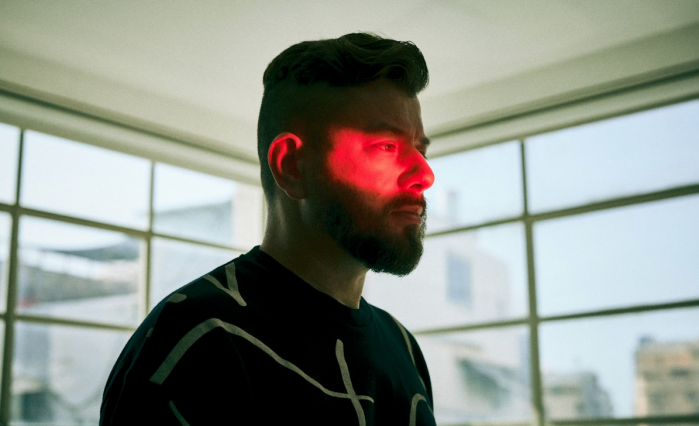 Highway Superstar has just released his latest track ‘Pangea’ – a scintillating synth single that will transport you back to early geologic time. The track comes from his soon-to-be-released album Contraband which will be unveiled on the 19th of November via Dive Into Music.

The Israeli producer has a string of hits under his belt, most noteworthy the soundtrack to Kung Fury on which his track ‘Careful Shouting’ was featured. He has also headlined RetroFutureFest performing alongside Futurecop, NINA, and Kalax.

We pinned him down for a quick chat after the release of ‘Pangea’ for some insight into his process:

Your single ‘Pangea’ is a mesmerizing listen, and incorporates natural/ organic elements with digital/electronic elements. Does the single evoke the emotions you initially pictured for the single?

Absolutely. I would say the end result is very close to the vision I had originally in my mind, and as I’m typing this, google’s predictive text is doing a pretty good job reading my mind as well… I started with the idea for the chorus , but had no lyrics. Over time I started hearing “Pangea, Pangea” in my head so I knew this has to be something about a distant land we could only dream of visiting. Somewhere lost in time. The lyrics to the chorus slowly fell into place as I was doing stuff that were not related to studio work, but I couldn’t complete it for the longest time, but once I set my mind on recording the vocals and actually sat on making sense from the bits and pieces of sentences I had that “sort of” fit what I was trying to say, it all came into place!

Which is your favourite track on your upcoming LP Contraband – what shouldn’t fans sleep on and why?

That question is so unfair! As I just released the album, I’ll sound like a cliche, but I can’t really pick a favorite because every track represents an integral part of one whole. I do hope you could find the attention to check out at least a bit of everything before your mind is made up 🙂 The moods are vastly different from track to track, so I hope that everyone finds their sweet spot in this album.

I was 12 years old, and Europe’s ‘Final Countdown’ came up on TV. I’ve been playing classical music for a while then, and liked Eurobeat and other sorts of stuff like Bon Jovi and Roxette, I also had an imaginary band with a friend of mine, we were called The Rockets, haha. But it was when THAT video came up, with the hair, the flashy stage banters and crowd that I realized I wanted a piece of that someday with music of my own

When I decided to step into the retro realm I was already some years into playing in bands. As I started writing my own material it came out like the stuff I loved jamming in between songs, which were mostly old hit songs from the eighties and synth parts. After discovering the early MySpace-era synth bands like Electric Youth, I had a clear vision that it’s the type of songwriting that is my 2nd nature, so I started putting a name on my music. I think the first track I released under Highway Superstar was very inspired by old Sho Kosugi and Cannon ninja b-movies.

Right now I’m in the middle of moving houses, and finally building a dedicated, acoustically treated recording space where I can spread my analogue synths out, but right now it’s a very minimal desktop and midi-controller setup as all of my outboard gear is in storage. I’ll be uploading progress pics!

Books, TV shows, movies, hiking and nature. I also love Soviet-era architecture and vibes. I know I’m gonna talk about music while the question is not really on the topic but I really dig how modern groups like Molchat Doma are drawing inspiration from architecture styles and these places that are imposing, and leave a mark on you just by looking at them, and you instantly associate them with the kind of music you grew up with and the vibe of living in these huge soviet mega-blocks. I was born in Belarus and lived in exactly these types of neighbourhoods so I feel really connected with that vibe.

My internet is really fast. It’s a fibre connection that is an almost symmetrical 1000/1000. This helps me express my artistic vision as I can upload files at high speeds 🙂

When I was playing synths for an indie dream-pop band called Reo, we opened for Tame Impala with over 10k people in the crowd and it was absolutely outrageous. When it comes to Highway Superstar, I think the shows I had in Stockholm, Russia, and London are my most cherished live memories.

With my new album, I’m going to upload two new music videos for ‘Feel it Right Now‘ and ‘These Chains.‘ Also, stay alert for physical Contraband releases your way. I really hope it’ll be viable to tour next year so I’ll be able to secure some dates to support this album. I’ve been missing the stage a lot, but it’s problematic to fly right now.

Keep the change, you filthy animal!