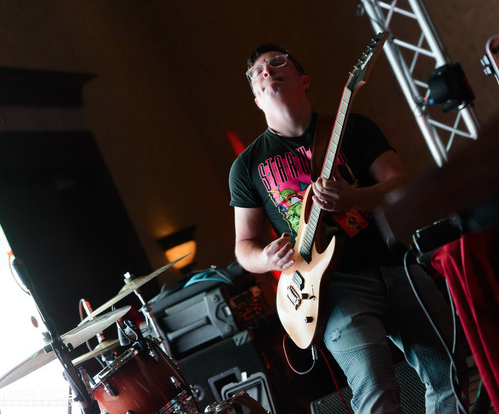 Straplocked is a synthwave music project started in 2017 by Hardrock guitar player Chris Carvache. Originally intended to be a progressive house project, the project took a quick and sharp left turn when Perturbator’s Dangerous Days album was discovered.

Constantly looking to collaborate and grow, Carvache’s guitar playing is found prolifically in the synthwave underground scene and is incorporated into all live performances.  Having an established no limits philosophy, the Straplocked project continues to evolve, incorporating lateral forms of art including storytelling and visual expression.

See our exclusive interview with him below

I’ve always been influenced by video game music, heavy metal and minimal house music.  I think one of the most important moments for me that ultimately led me to become an electronic music producer was when I heard DeadMau5’s ‘I Remember’.  That song was aggressive, sexy and made me feel almost as if I was super high on drugs.  That euphoric feeling almost instantly drew me towards electronic music and is a feeling that I aim to reproduce as often as possible on my tracks.

The thing that actually pushed me towards making synth-based music was my boss Alex Donovan.  After working together for a few years and always listening (but not paying attention AT ALL) to synthwave in the background, he suggested I listen to Pertubator’s “Dangerous Days”.  That album was exactly what I needed to hear.  It was dark, aggressive and used lots of classic synths sound in a way that I never thought.  From there, I then heard Make and Vanity Set’s ‘Implant’. When I heard that track, I instantly thought, “I could make something like that!”

Oh a bunch of stuff!  My MacBook Pro and Ableton Live are at the core of every track I write.  From there, I use MAINLY Serum for my software synth of choice and then I have a nice Prophet Rev2 that I recently bought for extra sonic quality.  I’ve been lucky as I have several hardware synths (that surprisingly I have been mostly gifted) – Novation Bass Station 2, Korg Minilogue, Yamaha TX-81Z (I think), Korg Triton Rack, Roland JV880, Casio CZ-101.

Then to top it off I have a few really nice guitars.  I’m mainly a shred style guitar player so I like fast necks.  I have a couple REALLY nice Ibanez (one of which is signed by John Petrucci), A beautiful Jackson that my amazing fiance gifted me on my first Father’s Day, and then a couple of Paul Reed Smith’s including a heavily modified 7 string.

No amps anymore.  I record directly using a combination of layered sounds with my Line6 POD X3 Pro, Bias FX (friggin LOVE this plugin) and Guitar Rig.  I use a few pre-gain effects but nothing special at all – Morely Wah, T-Rex NeoComp, Ibanez TS808 reissue.

All of this gets mixed in Ableton Live with Fab Filter plugins, a pair of Yamaha monitors and a bunch of various headphones for reference.

I think that’s about it 🙂

My family, my friends, my kids, my fiance and the general craziness of life.  Anyone that knows me on a personal level knows that a lot of SUPER weird stuff happens to me on a very frequent basis.  I’m actually collecting and writing these odd experiences as they happen in hopes that after a few years, I’ll have enough content for a book.

I’d say I have a pretty extensive relationship with the internet.  I build websites / web apps for a living so I understand the internet on a very technical level.  But after becoming a father and having my social life die down dramatically, I ended up socializing on the internet for the first time in my life.  It’s a pretty incredible thing because I’ve made solid friendships with people that I’d otherwise have never met; people from other countries, other regional producers.  In fact, I had Turbo Knight all the way over from Finland stay with me for a week in 2019.  Funny how life halfway around the world is so similar… But that would have never happened if music and the internet weren’t interested in mine.

I think one of my favourite shows was being involved in the 2018 NEON Festival.  Grant Garvin gave me a shot to perform at his amazing event that has to lead to many more show opportunities.  It was also the moment I realized that unlike most live electronic performers, I CANNOT be chained behind “the desk”, and that I CRAVE live instrumentation in electronic music from both a performer and audience member.  If you ever attend a STRAPLOCKED show, be ready for lots of beer, shredding, jumping jacks and constant yelling at the audience.  That show made me realize all of that and the very next week I went out and bought a wireless guitar system.

Where to start!  In no particular order, Ray Gun Hero, ZITH, Misanthropix, DEADLIFE, Inexedra, Extra Terra, ALEX and Tokyo Rose are some of my personal favourite artists right now.
Please suggest an album for us to listen to.

One of my all-time favourites is David Joseph Wesley’s Syzgyg album.  I haven’t a clue as to how you say this but, it’s completely fantastic.  All sounds recorded live with a Prophet 6.  I still listen to that album weekly at least a few times.

I always have gigs popping up.  From synthwave based shows to video game festivals/conventions.  SHAMELESS SELF PROMO… Follow me for updates!

I’m a lush… So it’s usually something like… JUST ONE MORE SHOT MAN!!!