You are here: Home / Interview with unapologetic synthpop loving duo At 1980 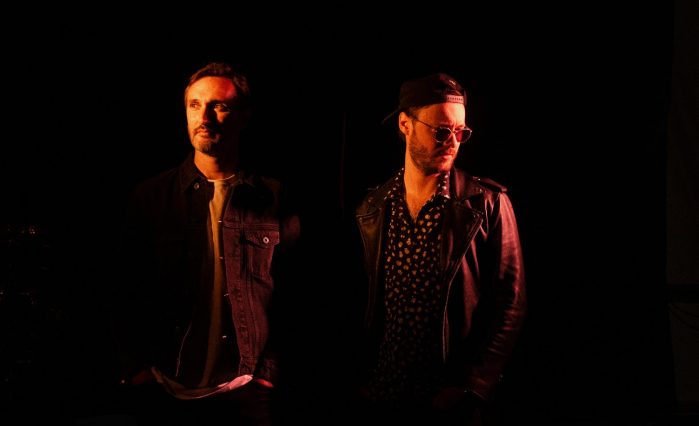 Consisting of friends Adrian Quesada Michelena and Josh dally, the synthpop duo At 1980 was born out of a mutual love for ‘80s movies and soundtracks. They have just released their second studio album Late Night Calls via NewRetroWave, and it is definitely giving one that early ‘80s Bryan Adams vibe paired with the more contemporary sounds of The Midnight. Whether you were born in the ‘80s or not, this album shares thoughts on isolation in the global pandemic and distant relationships – definitely an element for everyone to relate to. To date, the duo have charted at #8 on the iTunes Electronic Music Charts and have been streamed over 3.5 million times on major platforms.

We chatted with the lads of At 1980, and found out about their movie-like pairing.

As for many retro/synthwave artists, watching Drive was a huge pivotal moment that was hugely inspiring for both of us. However, digging deeper, probably watching John Hughes movies in our teens may be the most pivotal moment. Starting your first love relationships in real life and watching those movies on a Saturday night with those soundtracks may be the biggest influence in our songwriting.

I (Adrian) stumbled across The Midnight on youtube. That was exactly the music that I wanted to listen to for the rest of my life. It inspired me to start writing again. For Josh, it was listening to Kavinsky and Timecop1983 at a party in London back in 2013. All of our lives we had been told that we “couldn´t” do music that was so unapologetically ‘80s inspired, and all of sudden it seemed we could.

This is your second album release together, how did you guys meet one another and decide to make synthpop?

We first met by Adrián sending me an email asking if I would like to help produce and write one of his songs. I had so much fun doing that track and felt like a true creative.  And then there is the friendship connection that naturally evolved into a conversation asking whether we should join forces. The rest is history.

We both work with Logic as a DAW. As we live in different countries, this makes it easy to share sessions. We base our sounds with soft synths (especially U-he Diva, Sylenth1 and TAL-U-NO-LX), and usually do most of the mixing inside the box. For the second album, we recorded the vocals and guitars (we used Fender Strats) at Brighton Electric Studios through an API desk.

Well, life in general. It´s hard to pinpoint 1-2 things as our music is basically the expression of emotions that may have been building up inside for days/weeks/months. Then we try to take that feeling and bottle it up in the shape of a song.

We love the interaction with our followers and listeners, which the internet of course enables like in no other period before. But we would say we are not excellent at keeping a very prominent social media presence, it is quite an exhausting task if you want to do it properly. I am not sure it informs our artistic expression per se, but feeling the connection people have to our music definitely fuels our desire to write more.

Metallica in Madrid 1996. That was my (Adrian´s) first live show. Hearing those heavy guitars through those massive monitors for the first time was a life-changing experience.

They are not exactly new, but we have been enjoying some of the years new releases by The Motion Epic, Shadowrunner, Syst3m Glitch and The G.

What made you decide to release a live performance video for ‘California Nights’?

We recorded a live version of ‘California Nights’ for many reasons but the main reason was that it’s fun to play live. We love the energy of playing live and we wanted people to see us play the song how we envisioned it being presented when we wrote it.

We are figuring out a couple of collaborations that we think people may be excited about, but we have to keep the secret for the time being.