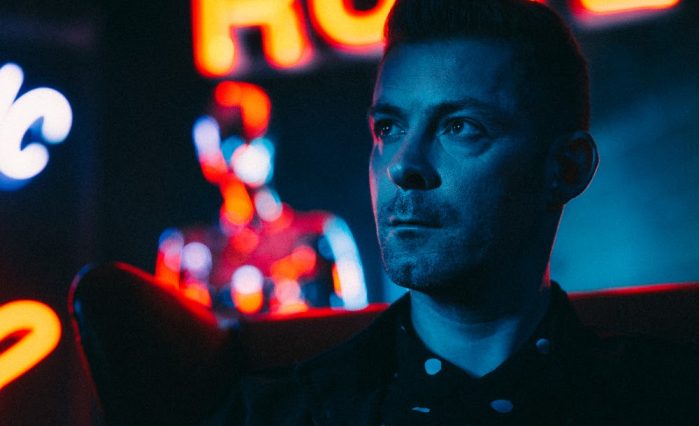 Michael Oakley continues to express his undying love for sounds of the ‘80s with his new album Odyssey via NewRetroWave. The Glasgow born musician succeeds at making a piece of work that is both a nostalgic listen, but also quite modern in terms of its technical electronic aspects. Inspired by classic acts like Depeche Mode and the Pet Shop Boys, the artist pays homage to these pioneers of the wave music scene. Michael is a self-taught musician that has charted at #4 on Bandcamp’s Electronic Album Chart with the Odyssey album – we are in awe. Featured on this epic album is the track ‘Is There Anybody Out There’ which follows the storyline of the hopeless soul and takes a light approach with Oakley’s gentle acoustics and dazzling electronic infusions.

We chatted with the renowned musician Michael Oakley and found out some interesting facts about him.

Miami Vice for me is the first-ever TV show that used music to perfection. They really pushed home the action and emotional intensity of scenes and gave the show a cinematic quality. Michael Mann was really ahead of the curve with that. I think in my music across all my albums you can hear that Miami Vice influence.

The first electronic music I was exposed to was Depeche Mode – ‘Enjoy The Silence’ as a kid and that made me fall in love with the idea of wanting to get a synthesizer to make my own music. Then after discovering a stack of ‘80s music in my sister’s record collection, I was hooked on the ’80s listening to bands like Pet Shop Boys, New Order, Tears For Fears and Erasure.

I use Ableton Live with synths like Omnisphere, Nexus 3, UVI Vintage Vault 3, Spire. And I also own some hardware synths like the Ensoniq VFX, TS10 and MR Rack (I’m obsessed with Ensoniq).

I love to play video games and have currently been reading books on concept albums from the 1970s. I like to get out and listen to audiobooks when I go walking, but honestly, music is so much of my life that it’s a part of everything I do.

Well, I have a bit of a love/hate relationship with the internet. I love it because it allows me to share what I’ve been as well as my music releases, and it also lets me interact with fans of my music. I do find social media a big time suck though and you can spend an hour easily without realizing it. And you’re just scrolling mindlessly without actually taking any information in. So I just try to keep my social media time to a minimum. It’s hard work maintaining a Facebook, Instagram and Twitter account!

How do you feel about having your album charting at #4 on Bandcamp’s Worldwide Album Charts?

It’s an amazing feeling. The thing that any musician wants is for their music to reach as many people as possible. So hearing that my album charted like that lets me know that it’s getting out there and being heard.

Definitely Outland 2019 in Toronto. That night was incredible playing alongside some of my heroes like Timecop1983, Kalax, Dana Jean Phoenix and FM Attack. People flew in from all over the world to be there and it was super nice talking to everyone after the show.

Laura Dre and Syst3m Glitch are two retro artists to check out.

Your new album focuses on the synthwave genre and makes one feel nostalgia for the ’80s, but still has modern elements. What is the intention for your future sound?

That’s a good question. I usually don’t know that until towards the end of an album project. I listen to so much music and change my mind and tastes over time that it helps me create a diverse collection of songs and ideas that complement each other. I guess the short answer is I don’t know just yet. We shall see…

There’s a livestream show which I recorded a few weeks ago in Toronto. I’m very excited about that and will be making an official announcement about that soon.

Stop being what you think other people want you to be like and just be the you that you want to be like.