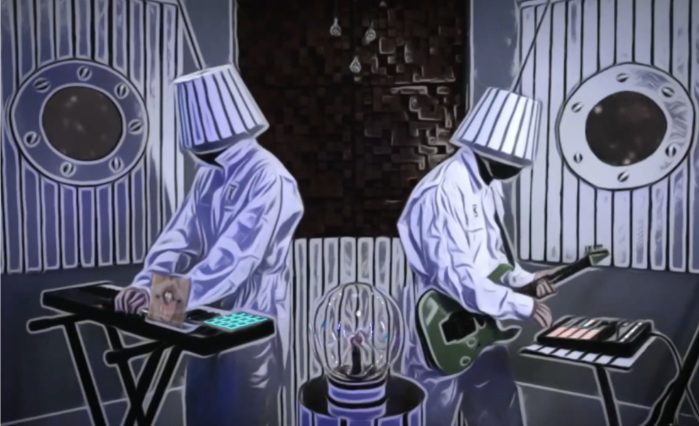 High-vibing electronic pop outfit The Keplerians have released their new ‘Spaceship Earth’ EP via Portuguese label Blim Records. A futuristic ride into cosmic dance territory, this high-energy three-track offering is supercharged with punch, positivity and a sense of adventure. The title track presents its first taste.

The Keplerians are RR 14-775 and RF 14-703, whose technology has allowed them to perform, produce and mix their own EP from their mothercraft in Lisbon, Portugal. The visitors also present another gift to Earthlings – the ‘Casa’ livestream, broadcast from their mothership, on which they channel stellar goodness from their recently released ‘Casa’ EP

On this planetary love-song, these astral visitors have issued a united statement, “This song was inspired by the famous words of Marshall McLuhan – “There are no passengers on spaceship Earth. We are all crew”.  This quote, featured in our track ‘Spaceship Earth’, was our starting point for composing this EP, following the same concept as our first one: spreading awareness about the need to preserve and conserve planet Earth, to remind earthlings that they have a beautiful, unique and epic Home that needs to be loved and cherished… and while we do this, why not also make them dance?”

Indeed, on this EP, The Keplerians deliver a powerful message while kicking up an electronic storm of good vibes and a desire to move one’s body, influenced by such artists as Daft Punk, Woodkid, The Chemical Brothers, Chromeo, Kool & The Gang, Modjo and Jamiroquai, as well as Hans Zimmer.

Now for the backstory: Two inhabitants of the planet Kepler-452b (KOI-7016.01) set out on a leisure trip through outer space but end up having problems with their ship’s geolocation system. After several fix attempts, they finally manage to solve the problem and their ship takes them back home. However, as the ship re-enters the atmosphere, they realize that it is not their planet… but a planet very similar to theirs, and which they later discover is called “Earth”. They discover that its inhabitants have a similar appearance to them, and they seize the chance to take turns discovering more about this new world.

During this discovery trip, they find something wonderful created by the earthlings, called “Music”. From their understanding, it seems to be a peculiar way of expressing feelings. At the same time, it’s also embedded in complex mathematical operations, exploring an acoustic vibration phenomenon they call “sound”. Deeply passionate about this discovery, they decide to dedicate themselves to it, expressing what they are feeling in this new world through the language of music.

Their passions then extend to Earth’s entire ecosystem – its fauna and flora, society and the interactions of its human inhabitants. All of these factors inspire them deeply. From their secret contact with this new world arises a global perception of life on planet Earth, as well as the need to leave a message for all Humans before returning to their planet: “Love your planet because it is your home”.