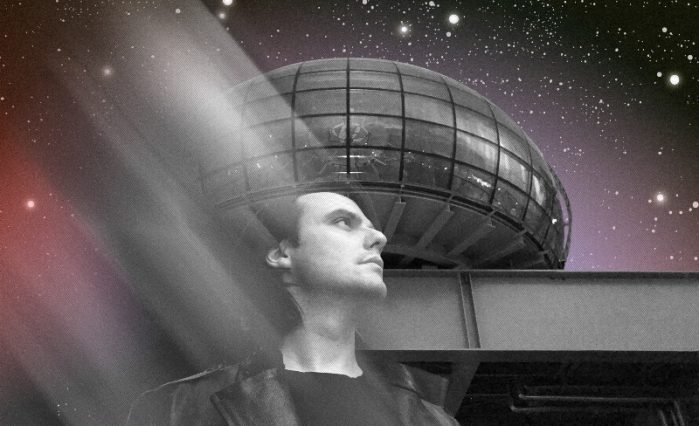 Multi-instrumentalist, electronic music producer and composer Perdurabo teases more music with No Limits Of Extension, the second single taken from The Time Traveller, the collaborative album created with !K7 artist Davide Tomat, due for release on May 21st .

The Time Traveller is a record born by a collaboration between Perdurabo and Tomat (!K7), nine tracks written in 2014 and rediscovered on a hard drive during last year’s lockdown. The album focuses on the idea of OOBE – out-of-body experience, a phenomenon in which a person perceives the world from a location outside their physical body. The inspiration comes from reworking the same music compositions at different periods in the artist’s life; each track represents a personal journey and singular OOBE. Music becomes the binder, capable of taking us far during a year of loneliness and immobility.

Talking about No Limits Of Extension, Perdurabo says; “during an out of the body experience you can stretch in time and space, with no limitations. This is what this track is about. Together with Unleash the Revolution is part of a lucid dream I had, the experience was completely different and intoxicating.

No Limits Of Extension, was created with a OP1 programmed sequence recorded analogically with a Prophet synth; you can hear a more powerful sound here,explains Davide. The elements I love the most on this composition are the strings and the piano, both recorded acoustically but treated highly electronically. The orchestra is just me overdubbing my violin dozens of times with three microphones for each take.

Perdurabo is the moniker of classically trained multi-instrumentalist, electronic music producer and composer Davide Arneodo. Living between Berlin and Turin, Italy, Davide has worked both in the studio and live with some of the biggest names in electronic and rock music, including members of Einstürzende Neubauten, Apparat, Placebo, Howie B and Skin, playing and releasing records across the world on both major and independent record labels. As the 5th member of seminal italian alt-rock band Marlene Kuntz; he contributed to the tremendous impact the band had on the Italian independent music scene, while as Perdurabo his most recent release was with Apparat’s drummer Jörg Wähner, releasing the collaborative EP Komponent, featuring Roman Rappak from Miro Shot and recorded at the iconic Funkhaus Studio in Berlin. Early singles, ‘Leads Me Outside’ and ‘Miss You More’, released on Bad Panda Records caught the attention of innovative London-based Kowloon Records, who went on to release ‘Mad’ featuring Chloe Charles. His most recent release comes in the form of ‘The Answer’ a piano composition chosen by Nils Frahm for his Piano Day 2021 Playlist.

Davide’s experimental work doesn’t limit to music, he has explored the world of contemporary art working with the video collective Masbedo, exhibiting at Art Basel and at the Venice’s Biennale. He has composed the original score for theatre plays commissioned by Turin’s Teatro Stabile di Torino, Volksbühne in Berlin, Teatro di Roma and Theatre de la Ville de Paris, performing both as an actor and a musician in shows all over Europe.

With The Time Traveller Perdurabo and Tomat have collided their two musical worlds into a universal journey rich in otherworldly atmospheres and textured compositions difficult to classify.