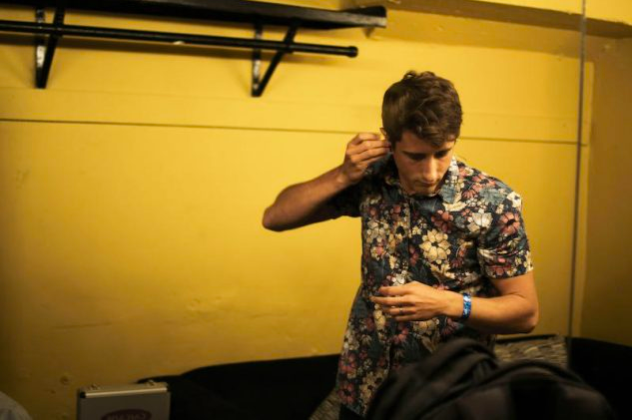 Paper Idol has shared his new track ‘Feel Real Pretty’ on Grimy Goods. When talking about the track Matan KG says, “I wrote ‘Feel Real Pretty’ while working as a project manager in Copenhagen; the brutally-long hours in the office brought my imagination to interesting places. One day, the story for the song popped in my head: some guy goes to a club, finds his drug dealer, buys some drugs and is told to “come back for more when you feel real pretty.” I thought the concept of getting high as “feeling real pretty” was a bit bizarre, but it made the perfect lyric. The scenario was painfully out of reach and felt taboo to even imagine, given that I was stuck in an office all day.”

Paper Idol is the brainchild of Matan KG, Milwaukee-born music producer and former Wesleyan University neuroscience student. It all started in 2015 as a college dance-punk project with a ragtag rotating band, leaving Matan studying by day and collecting noise complaints by night.

After college, Matan considered attending medical school. He took a job as a project manager at a healthcare technology company, and soon found himself in Copenhagen installing medical records in Danish hospitals. In response to extreme boredom and unfulfilled musical aspirations, Matan left the office behind, and – like many hopefuls before him – drove to Los Angeles without a home, job, or any real plan in place.

In retrospect, relocating to LA was the right move. Now settled in with a like-minded community of artists, Matan KG bounces between songwriting, producing, and performing. As a solo artist, he has amassed over 2 million streams on ‘Easy’ (Seeking Blue), with more collaborations on the way.

Paper Idol is more than just another indie-pop band; it is a multi-dimensional art project with Matan as the auteur. He writes, records, and produces the music himself, in addition to designing and creating the artwork. Inspired by nu-disco and dance music as much as art-pop and indie rock, Paper Idol offers a rare combination of new-school production and old-school vibes. This spring, Paper Idol is linking up with the formidable electronic label Lowly for a string of summer releases and playing select shows in celebrated Los Angeles venues such as The Mint and The Echo. While remaining a one-man act in the studio, Paper Idol is joined live by Adam Rochelle (keyboards/synths) and Victor Singer (drums).