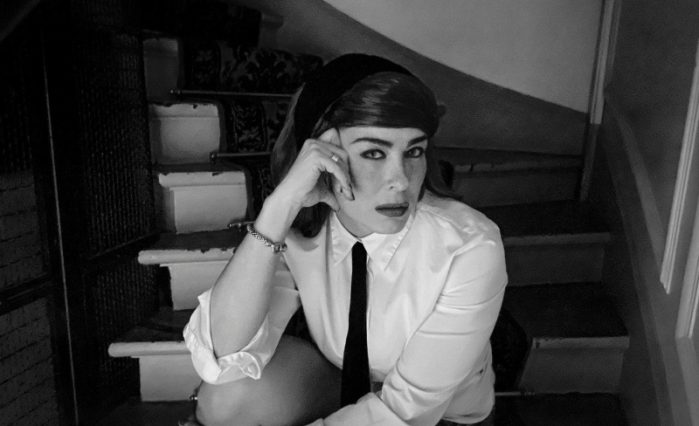 Making big career moves, Yota left her career in art curation and pursued a career in music instead. Many releases and singles down the line, the singer and songwriter returned with the album Lucid Dreams via NewRetroWave Records in 2021. A tongue-in-cheek listen lyrically, Yota holds the listener’s attention further with her enchantingly hush-like vocal qualities. Yota hopes to change the world one song at a time, by reaching the vulnerable and showing them that wearing your heart on your sleeve is in fact a strength instead of a weakness. We asked the one and only Yota a few questions about the album and some tracks that stood out for us the most in the exclusive Q&A.

What genre would you classify your music as?

I’ve worked with many different genres throughout the years so it is difficult to define a specific genre. My latest album is kind of a flirt with different genres like indie pop, French touch, nu disco, some kind of progressive electronic music, and of course synthwave. Somehow I do think we managed to make the tracks on the album merge although there are several different producers on it. Something consistent is probably the way I sing, write lyrics, and the overall mood in my songs.

What gear/software was used to produce the new LP?

I use a Neumann TLM 102 mic and Logic Pro X to record my vocals. The soundcard I use is an Apogee and I actually use a high-quality XDR mic preamp to bring some analog warmth to the sound. I bounce all vocals dry and send them over to the producers that then mix the vocals on their side. The producers are working with Logic or Cubase I believe and various synthesizers (Roland, Yamaha vintage gear, etc).

The LP track ‘Blame Me’ feels like it has a sarcastic tone attached lyrically. What was the intention with this track?

That is correct;). There is a little ironic or sarcastic touch to it all. I start by singing “Blame me, I’m into you and into your realm, save me, you’ll always be in high demand”. What it really is about is someone being spoiled with attention in a way that has affected their attitude towards others in a negative way. Someone with a kind of “larger-than-life” attitude and the challenge of bringing them back to earth. The lyrics are about approaching someone like that and slowly breaking down their barriers. Piercing through and finding their soft spot. A lot of people with big egos tend to have quite fragile hearts. I like the idea of that challenge and maybe also the idea of helping someone reconnect with their vulnerable self. I do believe that it is possible to do so and find it intriguing, but at the same time, there is a risk of losing yourself in the process which I’m also insinuating in the song. It is about a passionate relationship and about control (both having control and the lack of control). A kind of power struggle basically.

Album tracks ‘Lucid Dreams’ and ‘Paris’ sound like it’s merging EDM and Synthwave, was that always the intention?

I don’t think it was the intention. ‘Paris’ is made by Lifelike and I think he had first planned to release it on his side without vocals but then he thought I could give it a try and write some vocals to it. ‘Lucid Dreams’ is by Kris Menace and is a track that he wrote a couple of years ago. When I heard it I said, “Kris, I really need to have this one on my album, please let me write the lyrics and sing on it”. And he said yes!

What do you love most about synthwave as a genre?

I love the nostalgic feeling. The feeling that life can be magic and quite amazing. That feeling of happiness and those beautiful melodies. I love the ‘80s basically. There is something fresh about the genre too somehow. It is also a genre that connects us with strong emotions like love and there is often a longing feeling there that I really like. It feels like being in love basically, that’s why I like it so much.

You shared your debut album in 2017, and you release a fourth one now. How do you feel about that?

I feel very happy about it and I’m very glad to be signed on NRW. My album from 2020called Hazy Paradise opened up so many doors for me and suddenly I had a big new fanbase in the synthwave scene. It is really exciting and I feel very motivated to work on new material too. It is a source of happiness for me really. I can have a bad day just like anyone else, but if I find a new melody or hear a new track that I like, then I just feel happy again. It’s like an instant “happy-switch”;).

What was the motivation behind the album’s name Lucid Dreams’?

It is a dreamy continuation from the previous album Hazy Paradise. It is about being able to enter a dream state where one can control the outcome of a dream. A kind of parallel dimension one could say that exists as much as the reality we know in an awakened state. A place where dreams come true. I’ve had some interesting lucid dreams where I could take over and be in control like the one where I was flying high above skyscrapers at night in a city that looked like New York.  It was such an amazing feeling and quite surreal and I still remember it quite clearly. Lucid Dreams is about everything being possible, and also about hope and magic. I really do believe that most things are possible to achieve in life and that feeling is worth holding on to. Lucid Dreams is a kind of metaphor for hope. Lucid Dreams is an album full of emotions and during the writing process I was experiencing a feeling of being pulled in two different directions at the same time, like two opposing forces and I was in the middle of it. It’s kind of difficult to describe in words but when I listen to the album I reconnect to that feeling and state of mind.

What advice would you give to another individual that wants to change their career path?

The most important thing is to believe that change is possible because it is. Do not let fear get in the way. Fear is just a feeling that comes and goes, choose a positive mindset in order to reach your goals faster. Ask people for help. Have an open heart, be kind, and be focused. Most things that you have achieved in your life so far are due to things you have done or initiated before (a phone call, a choice, a letter, etc). Life rewards action. Keep on moving and do not let setbacks make you give up on goals. Don’t be too hard on yourself, sometimes we tend to speak to ourselves (in our thoughts) in a way that we’d never speak to anyone else, so be kind to yourself and let go of negative thoughts. The most important thing though is to listen to all of my albums of course in the meanwhile in order to keep your spirits up;).

Album  track ‘Blame Me’ features on the Spotify playlist SYNTHWAVE_GROUND.fm