You are here: Home / EXCLUSIVE: We caught up with Bill & Murray 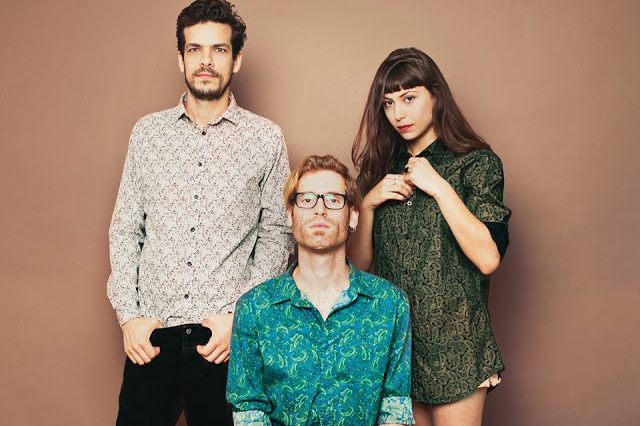 We caught up with Tel-Aviv based trio, Bill & Murray comprised of David Blau (guitar, vocals), Stella Gotshtein (keyboard, vocals) and Ran Jacobovitz (drums). What started as an experimental collaboration between songwriters Blau & Gotshtein, quickly turned into an active, performing and recording band, with Jacobovitz joining the band’s lineup in 2013.

After 3 years of activity, which included, performances all over Israel, participation in international music festivals in North America and Europe, an East European tour and the pleasure of being chosen to be the opening act for legendary synth pop artist, Gary Numan, Bill & Murray released their debut album, “A New Kind of High” on Other Voices Records. These days they are working on their 2nd album and the next European tour.
Hi there, how are you and what are you up to today?
Hi, we’re good. We are spread out in the world at the moment. Ran is playing with his other band in Primavera, Stella is in Berlin for a music tech fest and David is celebrating his birthday somewhere by the beach. We will unite soon.
To those not familiar with you, how would you describe your sound?
Bittersweet pop with a touch of 80’s.
What are the 5 albums that have influenced you the most?
David: Smashing Pumpkins – Siamese Dream
Nine Inch Nails – Downward Spiral
Ran: Sun Kil Moon- Ghosts of the Great Highway
Soundgarden- Superunknown
Stella: John Frusciante – Niandra LaDes and usually a T-Shirt
Which other artists are you into at the moment and why?
David: Sun O))), for their evil vibes.
Ran: Andy Shauf, for some of his unique melodies.
Stella: I’m not really into anything right now but i’ll check out what they just said.
Are there any key pieces of equipment that you are using to define your sound?
We use a Kawai keyboard and and a Yamaha RY-10 drum machine. The Kawai is actually a big part in the sound of the band, but we are planning on doing some changes soon, to look for new sounds and instruments.
What would you say some of the challenges artists face today in the music industry?
Doing everything by yourself. Being your own manager, producer, booker, promoter etc. For some people it might be an advantage but for most of us it’s pretty exhausting. Then when you become a more established artist you have the challenge of standing out in this enormous sea of always available music.
Where do you gather songwriting inspiration?
Probably like everyone else, from personal experiences. Life is not boring, especially here in the middle east.
Take us through your songwriting process. Are there any particular steps you take when put music together?
Both Stella and David write the songs. Each one writes their own songs and then bring them over to the band’s rehearsal. There were a few times when we collaborated on some songs. On “The Silence Grows” for example, David composed Stella’s lyrics. Usually we just bring our songs to the band and we start trying ideas until something starts working. Ran (drums) has a lot of input in this process, he’s one of the most musical drummers we know.
What’s the best gig you have ever done and why?
Povalec festival in Czech republic. It was the best audience we ever had. They went crazy, they sang and danced and were all into the music. Happy days.
And the worst?
There was one in Israel, in a place called “The Library”. It’s kind of a food/bar/dates venue with too much light and sober people and mice. The entrance was free so the place was pretty full, but no one clapped even once through the whole show. It was too awkward.
If you weren’t a musician what would you be?
Stella: a successful musician
David: If I weren’t a musician I’d be a 1950’s milkman.
Ran: If I weren’t a musician I’d be a miserable man.
Do you have any particular gigs or festivals that you dream about playing?
No, we’d love to play wherever there’s a big audience and a cool view.
If you could perform alongside any other band or artist, who would it be?
Stella: PJ Harvey
David: Nirvana.
Ran: Arcade Fire.
Do you have any information regarding upcoming releases, projects or gigs in the pipeline that you would like to tell us about?
Our debut vinyl is about to be released soon, pre-order is available here: https://othervoicesrecords.bandcamp.com/album/a-new-kind-of-high
Meanwhile we are working on our second album, shows will be announced soon. Stay tuned!