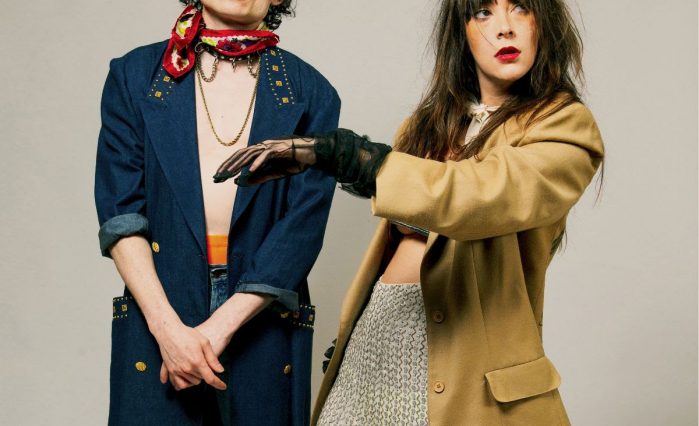 Stuck in the 80’s in more than one fashion, Paupière’s latest single ‘Coeur Monarque’ shows appreciation to the work of synth-pop legends like Depeche Mode and The Human League.

Now led by Julia Daigle (visual artist) and Pierre-Luc Bégin (Polipe, We Are Wolves), Paupière is a glamorous and flamboyant duo from Montreal with an underground sensuality that creates pop music that is both naïve and profound.

In “Paupière”, there is “skin” (peau) and “stone” (pierre), the organic and the mineral, sensitivity and hardness. Paupière, with its raw words and uncompromising melodies, confirms with its new album, Sade Sati, its desire for authentic expression.

In “Paupière”, there is also the word “pop” as in Pop music. Their writing services the melody, offering us songs filled with these catchy little phrases that turn and turn in our heads until they’re fully anchored in our memories.

Mixing English synth-pop and French chanson, the “neo-romantic” duo lets us hear echoes of Human League, Deux or Depeche Mode in their work. Their intertwined voices sing the adolescent and hedonistic romanticism of the 80’s as much as our contemporary disenchantment. As in Xavier Dolan‘s films, they share the director’s vision of destinies torn between ultra-romanticism and despair. With the support of director Vincent Levesque (We Are Wolves), they have integrated organic instrumentation that enriches the electronic compositions of the ablum while keeping their signature sound intact.