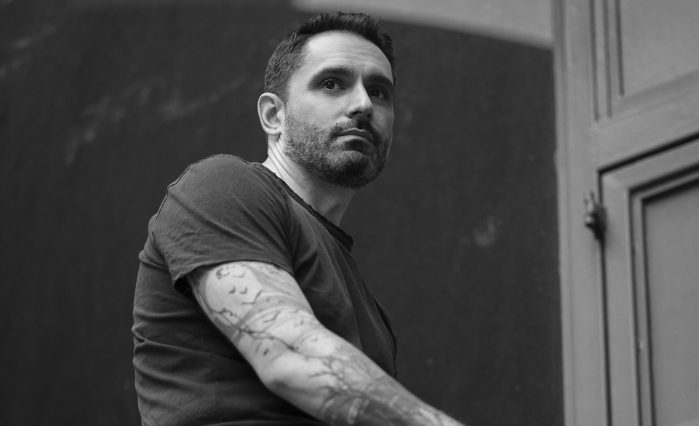 Electronic producer Verasect has just released his latest album, Awakenings Remix EP via Terminal Blue Records. The album features the remixed works of the late Øfdream, Kareful, Dobie and Blood Wolf. The distinguishing styles of each producer shine throughout the album, taking each of Verasect’s singles and embellishing the original style of the track rather than overrunning them.

You can read our previous article on one of the remixes here.

Back in high school in New York I wasn’t musical at all but hung out in creative circles. Most of my friends were in alternative or metal bands and I wanted to get involved somehow. I remember reading an interview with Jard Louche of Chemlab about how you could do anything musically with a sampler and how it was the future of music. So I picked up a sampler and started experimenting. Quickly, I realized it was more fun to do my own thing and began writing my own songs.

My Pro 2 is my go-to synth when writing new songs and the centrepiece of my studio. It’s a modulation beast and with lots of ways to subtly add grit to your sound. I don’t like dealing with vintage gear so I dial up Diva if I want a creamy retro synth sound. The only things I have on nearly every track are TAL-Chorus and TAL-Reverb-LX. They are free effects but I love their tone. Put them together and it sounds like heaven.

When I moved to London I sold all my gear and started fresh. I had a lot of rackmount synths that I picked up cheap second-hand. I could never resist a good deal on anything analog.

When I started building my studio in London I took a different approach and bought a Prophet 12 which is a powerhouse, do-everything synth. This changed my thinking and I now have less but more powerful gear. I also have a rule that I don’t put anything in storage so if I want something new I have to sell something to make space.

I really just want to keep doing what I’m doing and release an EP of new songs every year. Working with a different vocalist on each song keeps things interesting.

The state of the world today for better or worse is inspiring a lot of sad and angry music. Whether it be climate change, social injustice or wealth inequality, there is a lot happening now to release intense emotions in people. The world is not stable now and like in the 60’s we are seeing a rise in tension that is producing some amazing art.

I don’t think there is a perfect anything and certainly not a perfect genre fusion. I almost feel there is too much co-writing and crossovers in music now, particularly in pop music. Even microgenres now don’t have time to really develop before their sound is ripped off by bigger artists. It’s an easy way to evolve but I rather see a return to artists being experimental themselves rather than borrowing as a form of experimentation.

What was the core concept that drove the creation of your latest EP, Awakenings Remix?

Awakenings began as my friend Dobie asking for stems for Catch Your Breath and coming back with a brilliant remix. It never occurred to me to do a remix EP before then but once I heard it I thought, let’s remix the whole of Sleep Stories.

We see you’ve worked with four great artists for this EP. If you had the chance to work with anyone in the future, who would you like it to be?

Sidewalks and Skeletons was working on a remix for this EP but Jake got sidetracked with his new album. I hope we can work on something in the future. As for vocalists I would love to work with Luna Shadows or Alice Glass who are both doing amazing things and would fit well with my sound.

Finally, one last philosophy you’d like to leave your fans with?

If you are unhappy with the world either join a cause or make art. Preferably both.