You are here: Home / A conversation with genre-defying electronic music producer Jay Wud 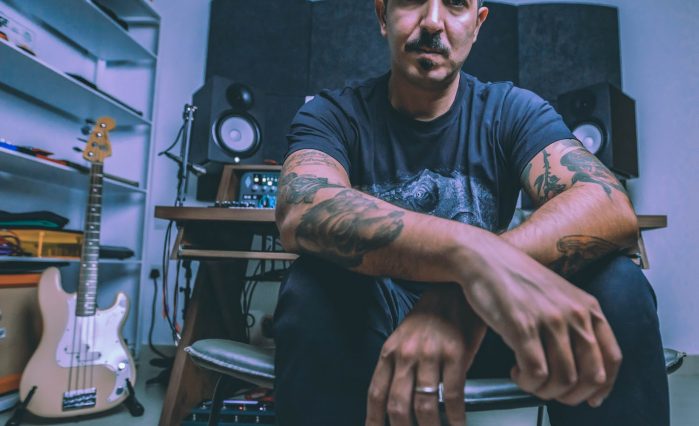 Jay Wud has left fans at the edge of their seats with his latest LP Dark Cinema, which was released on Monday. This album touches on the darkest period for most, if not all of mankind; that being the ramifications of the pandemic. The music producer is known for releasing work that speaks on his current feelings irrespective of genre conventions. His confidence and dedication, has seen him rule the stage with iconic bands like Gun N’ Roses to the likes of The Scorpions.

I do appreciate a good TV show like ‘Dark’ or ‘To the Lake’ they are super good, but that never really influenced my compositions. I know I’m drawn to stranger things, pun intended. But I believe the inspiration is more about the story than the music.

I make retro/synthwave? I did not know that! Haha. I got obsessed with synthesizers about 5 years ago because of a good friend of mine Elie Afif who’s also a music producer and excellent bass player. We’d sit down, listen to different synthesizers, and try to emulate all sorts of sounds. That got me hooked instantly.

My main hardware synthesizer is the Oberheim OB6. I was always drawn to it for some reason. My other hardware gear would be OP1, OPZ, Dave Smith Tetra, Kemper amp, Orange amp ESP guitars, and some pedals here and there. I’m currently building my own modular setup, can’t wait to start experimenting with that. As for software, I use Ableton.

With your single ‘I Can’t Breathe’ the execution of the single feels like it is replicating someone having an anxiety attack, with the shortness of breath and sounds of despair. Was this the intention for the track or was it just by chance that it came across this way?

It all started with me recording that anxious breathing on the intro and from there the whole production of the track followed. So yeah, it was intentional. I was going through a very rough period with the lockdown and I wanted to make a track about it.

Comic books for sure. Big fan of Alan Moore’s work and I do own a good amount of Vertigo publications.

I use the internet to promote my music, consume new music, and learn stuff. I don’t think we can function as a society without the internet these days. We are wired to be online, I don’t mind that. I wish I had access to that when I started making music early on, I’m sure it would’ve made a huge impact on the information I could acquire.

I think supporting Gun N’ Roses was one of those memorable shows. It was their first visit to the Middle East and my band at the time got picked to open the show. We were playing for a crowd of 20k!

You mentioned that each track off of your new LP narrates the various stages of lockdown, how much of the inspiration was internal vs external?

I think they’re intertwined. We are all vessels and anything that impacts the world on a global scale will eventually get to us somehow. So every stage of that pandemic had a track.

It all started with ‘Pandemic Lockdown’ with the siren-like synth signaling the danger is coming. Followed by ‘The Orient’ and how the news was shifting to China and the outbreak. ‘Denial’ speaks for itself, it was all too shocking to accept. ‘I Can’t Breathe’ was dealing with the anxiety part. ‘Poetic Justice’ was the irony of it all. As for ‘We Are Alone’ I guess with how long this whole situation lasted there was a newly formed acceptance of our new world.

Not entirely new but I just discovered Klein on Spotify, and she is really interesting.

I’m always working on new music, and with the inclusion of a modular setup in my studio, I’m not sure where I’m heading musically. But I know it’s going to be good.